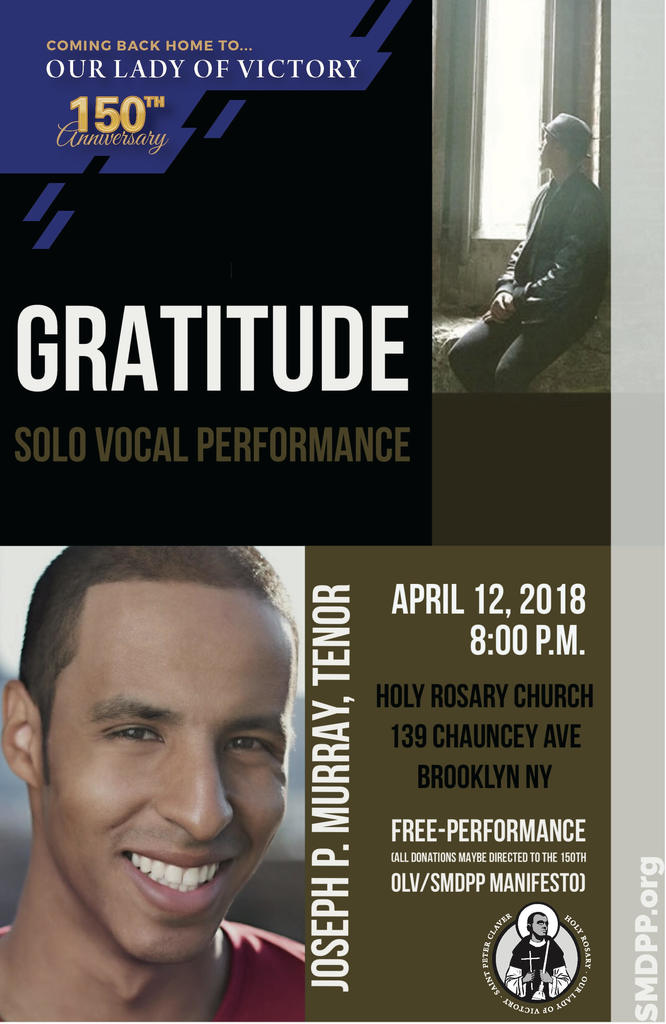 It's been over 10 years since I have performed a full concert consisting of classical & modern repertoire. As part of the celebratory events honoring the 150th anniversary of St. Martin de Porres' Main site, Our Lady of Victory Church, I will be revisiting some of that material, as well as tackling new pieces that I picked up along the last decade of my…

Another limited time stream of another cut of my upcoming LP, "Anomaly." With all that's happening in the world, I figured this record speaks to some of what I feel about what so many of us are experiencing a this time. Regardless of what this society says, take each moment for what it is, never stop dreaming, keep working towards a better… As some of you may know, I have just begun my second choral season as Associate Music Director for St. Martin de Porres Parish in Brooklyn. This beautiful 3-church Catholic organization has become like a second home for me - literally and figuratively. Over the past several months, the wonderful folks on staff and the community at large have welcomed me with open arms; they are so… 
So excited to finally be sharing music from my LP which is, by default, 6-7 years in the making. This track is called "Who I Am," written, recorded, and produced by yours truly. However, a HUGE credit goes to master audio engineer Ryoji Hata, for swooping in and taking this and the other nine records, hearing their mixes, and…

Keeping my promise to release this on Valentine's Day. I've been told I write too much, so I'll just leave various important…

I’ve talked about Lil’ Eddie several times over the course of my career, having had the privilege of meeting him back in 2008-9 via several networking events in New York City. I’m convinced he’s one of the most talented singer/songwriters in the business, and his track record proves my point in spades, as it includes highly… 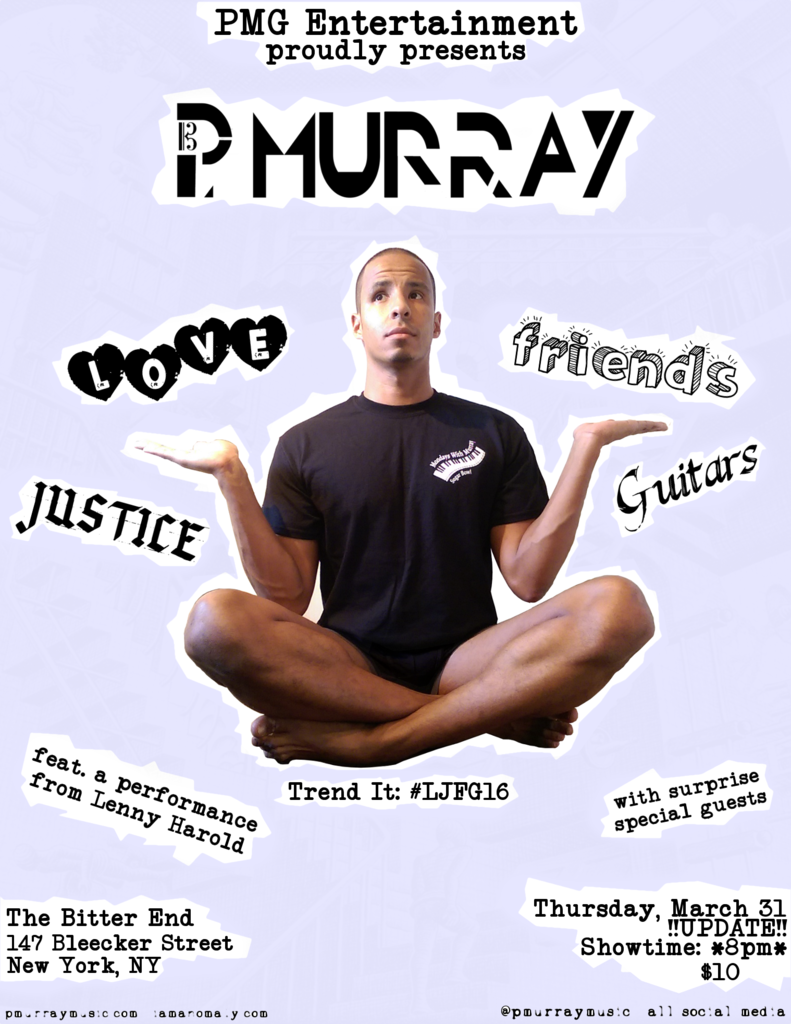 To say that I'm excited about this next show is an understatement. The legendary Bitter End has been so good about having me perform on their historic stage, and I do not take lightly the opportunity to share my gifts there. As the flyer suggests, I'm doing a different arrangement for these songs (originals +…

in the air tonight | stimela from P. Murray on Vimeo.

The answer is yes, of course I'm still making music.

Much love to Wynter Gordon (LaG fam).
Hope you all enjoy this one; please share it if you do.
Thank you for your continued… 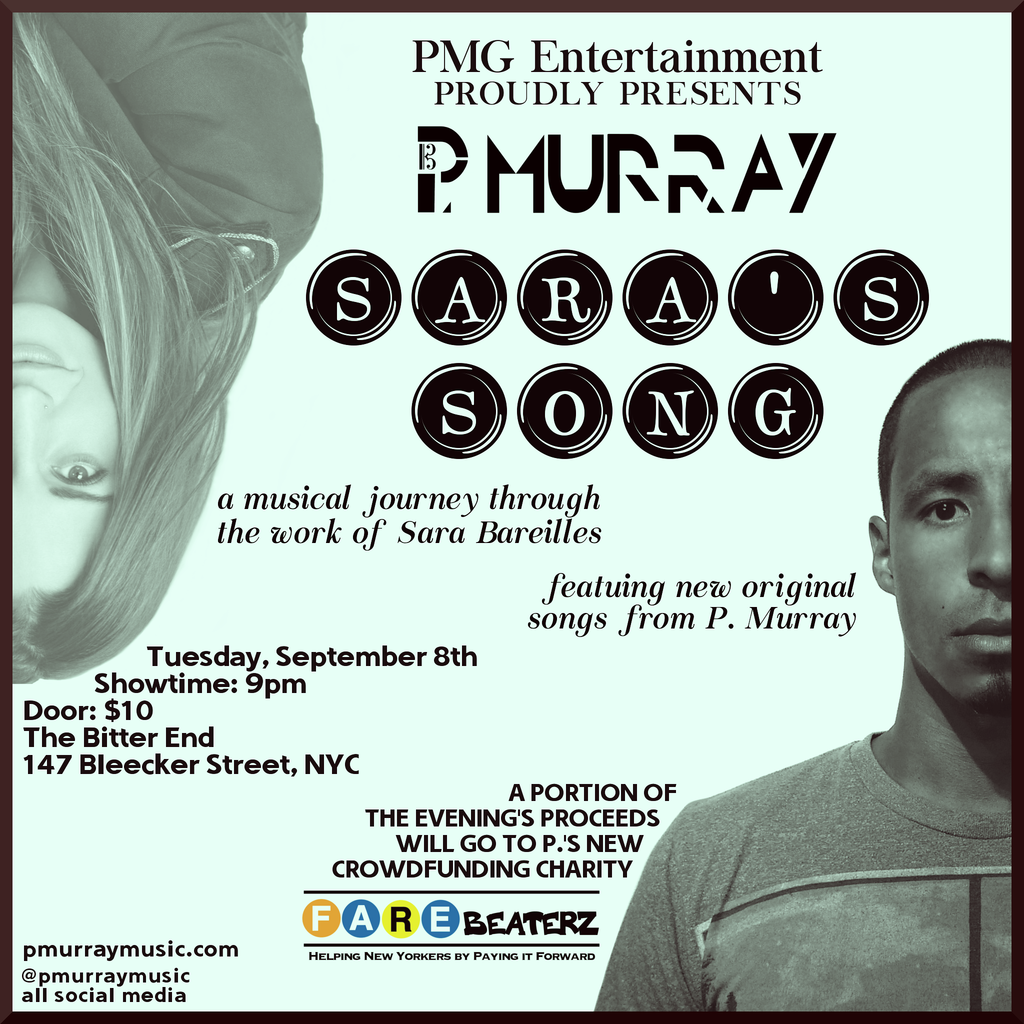 **NOTE: All photos used to promote this single are from the portfolio of the recently discovered late photographer, Vivian Maier. Fans of street photography will absolutely want to check out her work and her…

As promised, here is the second mashup for the month of November.…

4am at the Glass House from P. Murray on Vimeo.

Being a fan & colleague of both Luke James and…

P.'s Playlist: "With Or Without You" #GiveYourselfAwae | U2 Cover

The single "With or Without You" is, without a doubt, one of U2's most successful singles of their long, prolific career. What's interesting about this song is that during the creative + recording process, band members and producers alike were so confused and divided as to how they wanted the record to sound, that it was one executive…


In the winter of 2008, recording artist Brandy released her 5th studio album, 'Human.' The LP went on to sell over 200,000 copies, and while it was criticized for not being able to match her previous blockbuster releases, its music has been critically acclaimed as some of her most provocative & gratifying to date, even in the wake of her more recent,… After a successful (and super-fun) performance at the BET Music Matters Showcase, I'm so excited to return to the World-Famous Billie's Black gourmet soulfood restaurant and lounge. I had a blast last holiday season as a featured artist for the [Bon-A-Fide] LIVE! series, commandeered by Ricky Day. This June, musician/vocalist extraodinaire &…